The Blue Van- There Goes My Love

And here we have a song from 2008... I think everyone knows by now how brilliant,life-changing and bloody good fun my trip to northern Denmark in June was.This is a song I heard on the Friday night at the Aalborg Regatta,a 3 day event which turned out to be pretty damn excellent (more about that later). 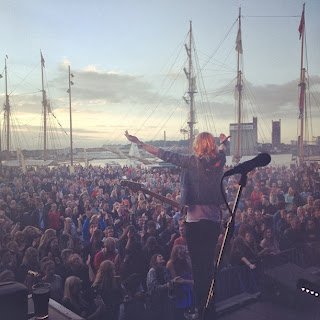 Much like Veto,I'd never heard of The Blue Van before,but they really were one of the highlights of my trip.The band are from Brønderslev,a little bit north of Aalborg,and actually you might have heard their music before.This song was used in an advert for the iPad, Love Shot (another of my favourites) was used in Magic Mike,and I'm A Man (also brilliant) was used in one of the American Pie films.Which is pretty cool. Anyway,There Goes My Love is pure filth,which is basically the main reason why I love it :)
Posted by Raquelita at 20:29 No comments:

Unnur Birna Björnsdóttir- Cobwebs My countdown,my rules,remember? So with that in mind,my 17th best song from 2013 is 2009's Söngvakeppni Sjónvarpsins entry,Cobwebs.It was also in Eurovicious' Almost Eurovision 2009 compilation,hence the reason why I heard it for the first time this year.I'm a connoisseur of sad love songs,and this one ticks all my boxes! I think "wistful" is probably the word to describe it.She doesn't sound so heartbroken as nostalgic.And the lines "I kiss you,I miss you,for you I adore/ I love you,I leave you,I'll see you no more" are some of my favourite lyrics that I've heard this year.That,combined with the wonderfully Nordic-indie sounding strings make for a brilliant song.Something about the rhythm reminds me of the sea too,which made this the perfect song to walk along the Limfjord to on four grey evenings in Aalborg back in June.
2009 Iceland - Unnur Birna Björnsdóttir (SF 4) by Galiza
Posted by Raquelita at 15:52 No comments:

Teitur- Antonio And His Mobile Phones I'll never get bored of this story... One night when I was in hospital, my dad came in saying one of my aunts had called him to say that she'd been in touch with Teitur, my ultimate musical hero. I mention him quite a lot on Facebook, and (I didn't even know my aunt went on there that much) she'd picked up on that and emailed him to tell him about my car accident/operation. His response? "Sounds tough." :) He asked for my details so he could send me Story Music, the new album I'd seen him perform in full, two weeks previously in Copenhagen. She missed a number out of our postcode, so when this huge packet arrived the day after I was discharged from hospital, with the wrong postcode and writing I recognised from the signed copy of Four Songs that I'd acquired after a show in Ghent last year, I did a small squeal. It wasn't just Story Music, it was this... 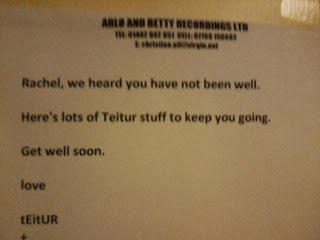 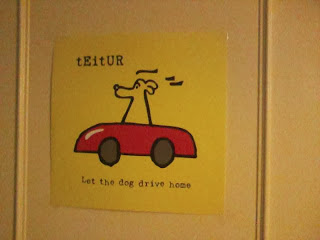 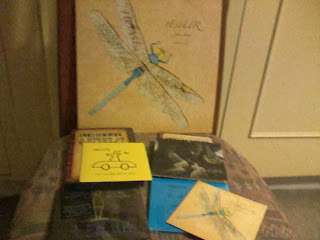 Some of those are promo albums with a few songs that I've never heard before as they've never been properly released. It's funny though, for 10 years, I've loved Teitur's lyrics, and quote them all the time. Never did I think that "let the dog drive home" would be good advice though :D Anyway, for number 18 in the countdown, I chose Antonio And His Mobile Phones, which is track 3 on the new album.I chose it because for me,it really encapsulates the idea of Story Music. Descriptive lyrics painting a picture of a mysterious market trader in Addis Abbaba, set to simple, cheerful music. Bonus points for using recorders and making them sound good. Mum always said they're "horrible, tuneless things." Not so in this case. But while this is the standout track for me, I do love the whole album. Every song is completely different, but they all fit the Story Music theme brilliantly. There isn't any audio/video of Antonio on its own, but here's a video that you should really watch. It has bits of each song and gorgeous, gorgeous shots of the beautiful Faroe Islands.
Posted by Raquelita at 21:43 No comments:

I said in the previous post that I don't usually like electro music. Maybe that's not strictly true...

At number 19, it's the wonderful (and rather attractive) Swiss boys Martin and Benedikt from My Body Has Legs. Any Eurovision fan worth their reputation will remember them from last year's SRF musical free-for-all, in which their song Flagstaff Paradise was the 500 carat diamond in a sea of cubic zirconia. But as is all too often the way with Eurovision national finals, it didn't get a look in. Fast forward to 2013 and they're back with the excellent 30 Days and 30 Nights, which is every bit as catchy and contemporary as Flagstaff Paradise, and arguably an even better choice for Eurovision. Alas, it isn't to be, and Switzerland will once again probably struggle to get through the semi final... But whatever. What's Eurovision's loss is our gain, and hopefully we'll be hearing a lot more from these guys in the very near future.

Veto- Take It Outside

As previously mentioned, not all of the songs in this countdown of 2013 greatness are actually from 2013. This is one. I nipped over to Copenhagen back in September to see Teitur perform at the Glassalen in Tivoli. Throughout summer in Tivoli, there's a load of open-air concerts by (mostly Danish) bands and artists on Friday nights, called Fredagsrock. I'd not been to one before and nor did I plan to go to this one, but when Teitur's show finished, I was drawn to this electro music going on on the stage 20 metres away. It's not normally my type of music, but the utterly gorgeous voice of singer Troels Abrahamsen and the- what I can only describe as- dirty, sexy bass lines kept me there for the whole set. And there, my love for Veto was born... The band are from Aarhus and have been around for nearly 10 years with their electro-rock and rather brilliant lyrics. I can't actually remember whether they did this song (from 2011 album Everything Is Amplified) at Tivoli or not, but it's subsequently become one of my favourites, and my most-listened to of this year*

*Until my car got written off and scrapped with that album still in the CD player :(
Posted by Raquelita at 20:41 No comments:

I have much, much blogging to do. Yet I've been off work for nearly 3 months now and done "nothing but zero" as Ani Lorak might say. So I'm going to put this right, starting from now, with my top 20 songs of 2013. As descriptions go, that's quite tenuous to be honest. There will indeed be 20 songs, but they weren't all released this year. I've been particularly slow on the uptake as far as new music is concerned, since I moved back home from university to our goddamn awful internet connection, so there are a few entries which might be quite old but which I heard for the first time this year. But they all mean something to me. My countdown, my rules, yeah?
On with the show...
Posted by Raquelita at 20:21 No comments:

Mind (and stomach) completely refreshed, I’m really hungry. Salvation is a Danish hot dog, resplendent with ristede løg (dried onions...), gherkins and... what’s this? A lack of remoulade. Oh well. It’s delicious anyway, and sets me up perfectly for the long walk back into Skagen.

The sun’s out in force by now, and my iPod is obviously just as inspired by Grenen as I am, as it’s throwing up some brilliantly appropriate songs on shuffle (Für Keine Kohle Dieser Welt by Philipp Poisel in particular). The blue sky over the yellow houses is just gorgeous, and makes me long for a summer house here where I can sit in a garden full of roses, drinking lemonade and listening to the sound of nothing all day. Actually, I’m reminded of this sign that I saw in Capri a few years ago. 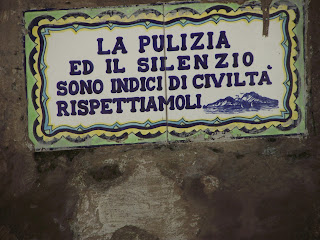 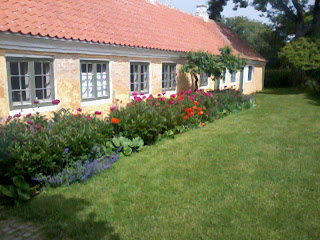 I go to the Skagen Museum which is housed in what was Brøndums Hotel- a favourite place for the Skagen painters, some of whom lived in the neighbouring buildings. I don’t think there’s a painting here that I don’t like (there’s even one called Stormy Weather!) , but my favourite is probably Summer Evening at Skagen by P.S Krøyer- a painting of his wife Marie on South Beach where I was this morning. I like the Krøyer’s story, being the fan of doomed love stories that I am. P.S Krøyer was susceptible to bouts of mental illness (though I’m still not sure exactly what this means...) and he was often hospitalised due to it. This took its toll on Marie, who went travelling alone to Italy in the early 1900s (scandalous!) where she had an affair with Hugo Alfvén, a Swedish composer. Krøyer refused to divorce her, believing the affair was just a phase she was going through, and even painted her and Alfvén together in one of his most famous works, St John's Eve Bonfire on Skagen's Beach. He eventually gave in when Marie became pregnant with Alfvén’s baby, but died 4 years later. Marie also divorced Alfvén in 1936, which leads me to the conclusion that these arty types never really know what they want. 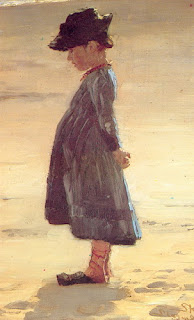 I buy a postcard of the little girl in Krøyer’s Summer’s Day on Skagen Beach. I find her particularly touching- the way she’s standing there all lonely and clearly sulking while watching the other kids have a good time. I think we’ve all been that girl at some point.

I start to walk back to the station. There are more people about now, and the shops (also yellow buildings with terracotta rooves) look inviting, as does a walk down to the harbour. But it’s so hot and if I miss the next train, I probably won’t be back in Aalborg til late.

At the station, two old women are having a moan about the Rejsekort, as (it seems) is the whole of Denmark at the minute. It’s basically a glorified Oyster card which you should be able to use on any Danish public transport. Seems like a good idea to me, but it’s been massively expensive to implement, it’s currently full of technical glitches, and people are generally confused about it. Some reckon it won’t last. I sort of hope it does. I’m so getting one next time I’m here.

Back in Aalborg after a *very* leisurely journey in which I basically have an entire carriage to myself the whole way, I kind of regret not looking around Skagen a bit more this afternoon. But, it’s not like I won’t come back. Like Teitur says in You Never Leave L.A- “part of me remains, I’m forever changed.”

I go for my nightly walk along the fjord. There are quite a few people out tonight and a cool atmosphere as everyone's getting ready for the regatta tomorrow. I hope it'll be good... 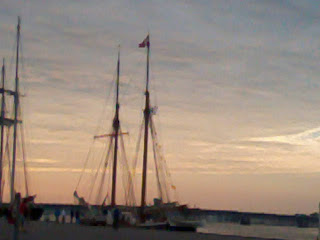 Posted by Raquelita at 18:44 No comments:

Look at these sites, they're cool